Air drilling is a technique used in areas where formations are “dry”, i.e. there is no influx of water or liquid hydrocarbons. High volumes of low-pressure air is used in place of conventional drilling fluids to circulate the well bore clean of cuttings.

The amount of air required depends upon the hole size, presence of water and to a lesser degree the hole depth. This method is also called “Dusting” due to the finely ground rock cuttings that exit the return flow line, also called the “Blooie Line”.

The main advantages of Air Drilling are as follows:

The disadvantages of air drilling can be its inability to handle formation fluids or to contain sloughing shales, thus reducing its application to consolidated “hard rock” country applications where there is little to no fluid influx. Also very large numbers of compressors would be required to drill larger hole sizes, which may be drilled more effectively using foam or aerated fluid.

Mist drilling is used when the rock formations begin to produce small amounts of water (10 to 100 bbls per hour) during air drilling operations. Air volumes are increased and a Mist Pump is used to inject small quantities of a solution of water and foaming agent. This solution entraps the water influx and enables the air phase to lift the cuttings and influx to surface. Without the addition of surfactant, wet cuttings may coalesce and form a “Mud Ring” in the annulus, usually just above the drill collars where velocities are reduced, resulting in lost circulation, stuck pipe, and/or downhole combustion.

The same advantages as for Air drilling also apply to Mist Drilling, though the increased air volume requirement for mist drilling will involve the 30-40% additional compression equipment.

Foam drilling is especially suitable for drilling large holes in formations that are prone to lost circulation. Foam is generated at the surface by mixing the air from the compressors with a foaming solution from the mist pump.

The consistency of this “foam fluid” is much like shaving cream with an interlocking bubble structure of encapsulated air providing a lifting capacity superior to that to any drilling fluid.

The adjustment of the Foam Quality (gas/fluid ratio) in conjunction with a back pressure valve allows the operator to produce a bottom hole pressure equivalent to a circulating fluid weight in the range 0.2 to 0.8 s.g.

Aerated fluids drilling is a technique whereby gas is injected into a column of unweighted drilling fluid (water-, oil-, or synthetic based) to reduce its specific gravity (s.g.), to as low as 0.6.

If there is a chance that hydrocarbons (oil, gas) may enter the wellbore then the gas used is usually membrane nitrogen or possibly natural gas from a nearby pipeline or producing wells. If no hydrocarbons are to be expected, such as on geothermal wells, then air can be used.

For aerated fluids drilling, the gas can be injected in a number of ways, namely: 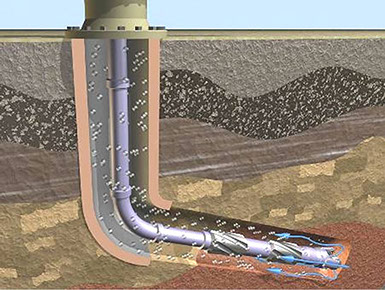 Standpipe Injection is the most common and simplest way of aerating the drilling fluid, by injecting compressed gas into the rig's standpipe at desired gas/fluid ratios at or above surface injection pressures. The air will combine with the drilling fluid and yield a (gas/cut) drilling medium with the air phase compressing through the drill string and gradually expanding as it travels up the annulus, improving velocities and lightening the hydrostatic pressure. 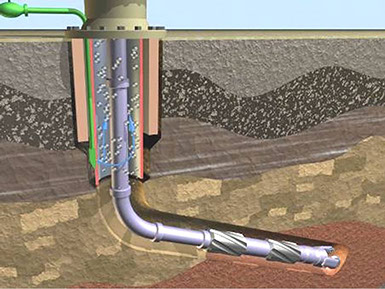 Parasite String Injection is done by running small-diameter tubing on the outside of the intermediate casing to a pre-determined depth, where it is ported into the wellbore. The gas is then injected through the tubing and into the wellbore. The depth of the injection port is determined by the maximum pressure reduction anticipated to avoid lost circulation. The total pressure reduction being used is a function of tubing depth, air mud ratio and mud weight. Concentric String Injection is similar to the above procedure of a gas lift of the fluid column by injecting gas into the annulus at a given depth. However in this case a liner is run in the well to provide a secondary annulus between the drillpipe and the existing casing, thus allowing injection via this inner cavity.

In conventional drilling the hydrostatic pressure caused by the drilling fluid provides the primary well control mechanism. The imposed wellbore pressure is designed to fall between the pore and fracture pressures and arises from two different mechanisms:

Sometimes it is impractical or even impossible to “fit” the mud weight pressure gradient between the pore and fracture gradients. This is especially the case in wells drilled in deep water, extended reach or drilled in HPHT or depleted fields.

Managed Pressure Drilling (MPD) is the process whereby the wellbore pressure exerted by the drilling fluid is controlled using surface back pressure arising from the pipe being sealed at the surface by a rotating head and a choke manifold. This enables uninterrupted drilling through narrow pore-fracture pressure windows. Pressure control is maintained using a combination of fluid density, circulating friction, and surface pressure adjustments. MPD is an evolving technology that can solve a wide range of problems, including differential sticking, unstable formations, wellbore ballooning, lost circulation, and loss-kick situations. Underbalanced Drilling (UBD) is defined as the situation where the hydrostatic head of the drilling fluid is intentionally designed to be lower than the pore pressure of the formation. The hydrostatic head of the fluid may be naturally less than the formation pressure or it can be induced. The induced state may be created by adding natural gas, nitrogen or air to the liquid phase of the drilling fluid. Whether the underbalanced status is induced or natural, the result may be an influx of formation fluids which must be circulated from the well and controlled at surface. 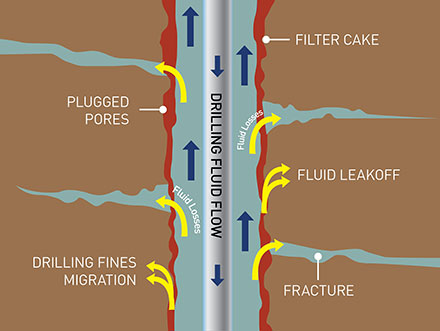 The Straume® hydraulic simulator is a highly configurable high-end multiphase well simulator with full pressure and flow dynamics, rigorous fluid definitions – including multi-fluids, capable of simulating most MPD/UBD operations and contingency scenarios. The simulator is suitable for testing of an MPD control system and training of MPD/UBD personnel in a controlled environment. 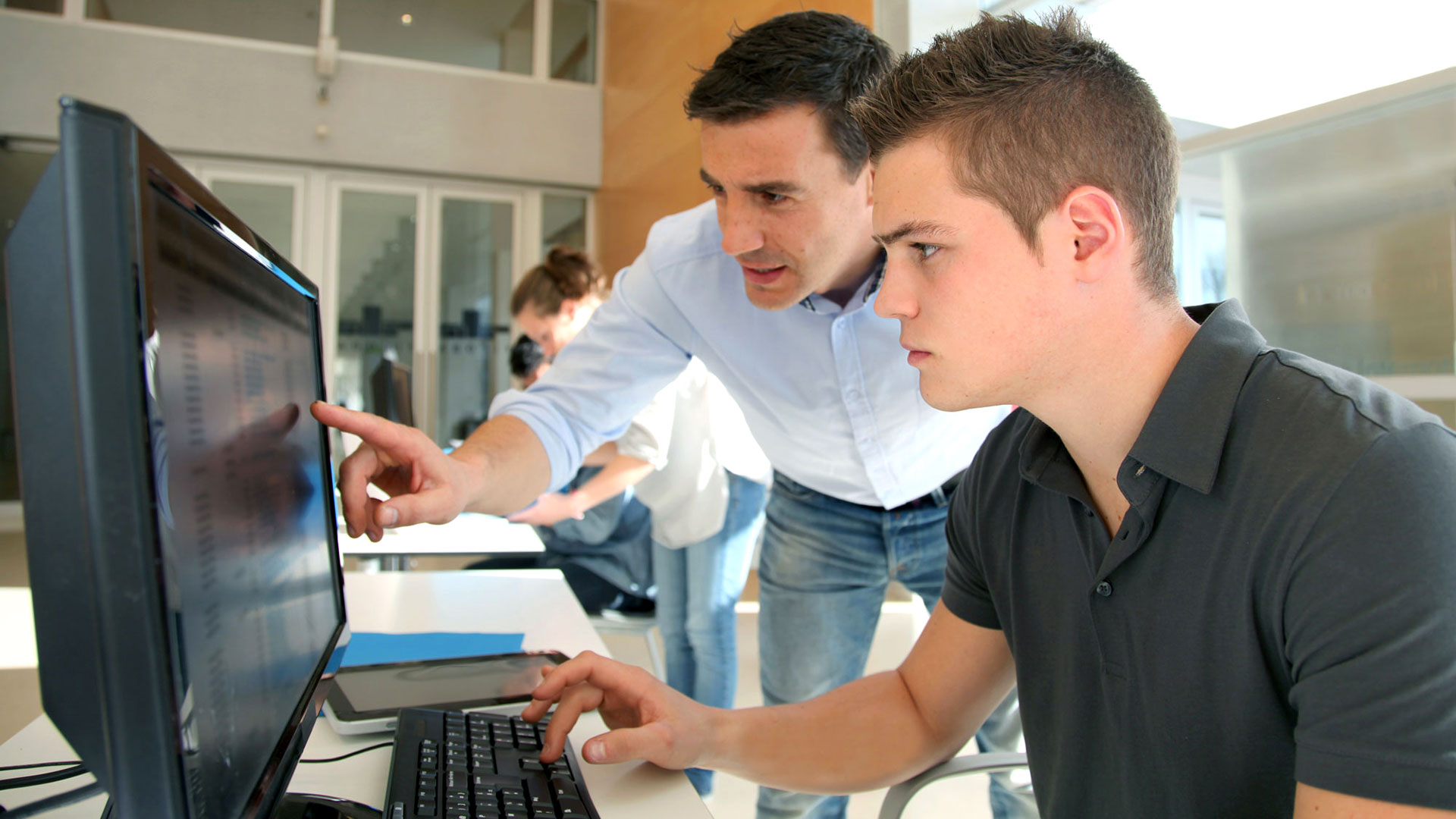 ADA regularly provides classroom and on-site training for clients and its contractors prior to executing a managed pressure/underbalanced drilling project. Such training may be complemented by the Straume® hydraulic simulator that allows training on complex MPD/UBD operations by allowing the introduction of various contingency scenarios under a controlled environment. This enables in-depth analysis of the consequences of various possible strategies to rectify a kick or a loss situation.

The Leidar® system is the only genuinely automatic MPD control system in use today that can robustly control pressure in both single-phase and two-phase (gas-liquid) systems. It does this by using an adaptive model-based pressure control system that introduces unparalleled accuracy and level of control of the MPD chokes. The Leidar system is able to achieve:

The significance of being finally able to robustly control the choke response in two-phase (gas-liquid) systems should not be underestimated. Conventional proportional-integral (PI) choke control systems are only “automatic” under very narrow operating conditions. In practice, such “automatic” PI-controlled systems require the operator to manually tune the PI variables each time an unexpectedly high gas/liquid flow and/or pressure comes across the choke. Only very few field operators are experienced enough not to overcompensate the choke response, as this could lead to an uncontrolled flow (not enough choke pressure) or a fractured formation (excessive choke pressure).

It is clear therefore that the genuinely automatic Leidar MPD control system provides tremendous scope for improvements in safety and cost reductions through automation and personnel reduction.

ADA extensively tested and verified the Leidar MPD control system over a period of six months prior to sending it out on projects for clients. 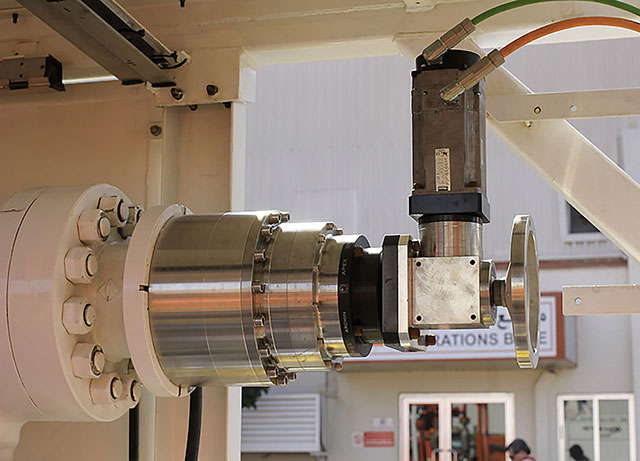 The Straume real-time hydraulic model of the well that is automatically updated as drilling progresses.

An Influx-loss detection (ILD) module (or early kick detection, EKD) that can also be run independently on conventional (non-MPD) drilling jobs. The ILD system is a model-based algorithm that provides robust measurements of the dynamic mass balance of the closed-loop circulation system. This provides higher certainty of detection, as well as unique capabilities to detect during transients. ADA can also design and install MPD control and/or early kick detection systems for use on existing and new-build drilling rigs. Please contact an ADA representative.

On an underbalanced drilling project the engineer is first faced with deciding what fluid system should be used “upstream” of the rotating control device (RCD). ADA can advise on the proper fluid composition as well as additives such as surfactants, corrosion inhibitors and so forth.

Invariably the drilling fluid may need to be lightened by injecting air, natural gas or on-site generated nitrogen. ADA has one of the largest and youngest fleets of air compression and membrane nitrogen separation equipment. We can deliver virtually any volume of high (95-99%) purity nitrogen at pressures up to 340 bar/5000 psi. 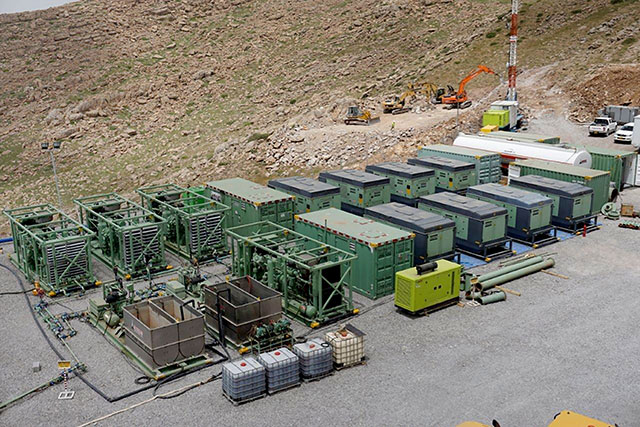 The “downstream” section of the UBD system deals with UBD “Drill Packs” that control and separate the return flow of gas, liquid hydrocarbons, drilling mud and cuttings. The oil and/or gas can be sent to an export pipeline or process facility, storage tanks, or a special burner. The drilling mud can be recirculated and drilled cuttings are sent to the shakers or confined storage. 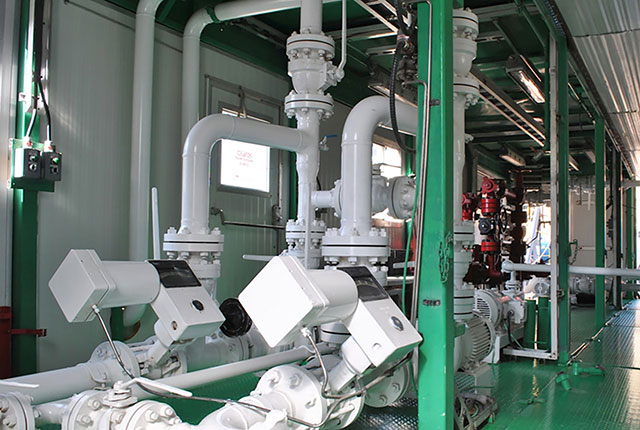 The four-phase UBD separators are designed to be capable of conducting long-term well testing operations. 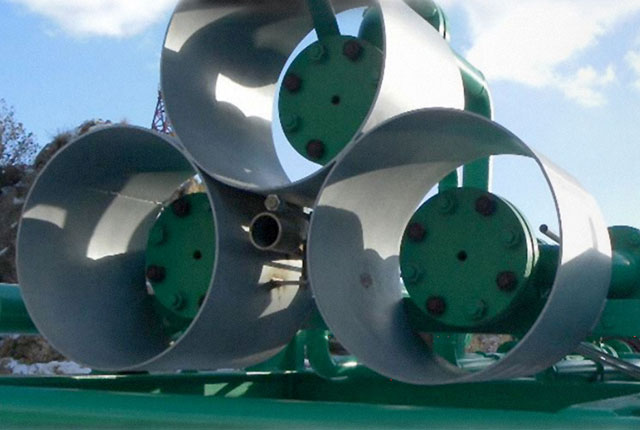 Remote locations may require an oil burner designed for maximum clean burn capability with minimal fall-out by using compressed air as a propellant. 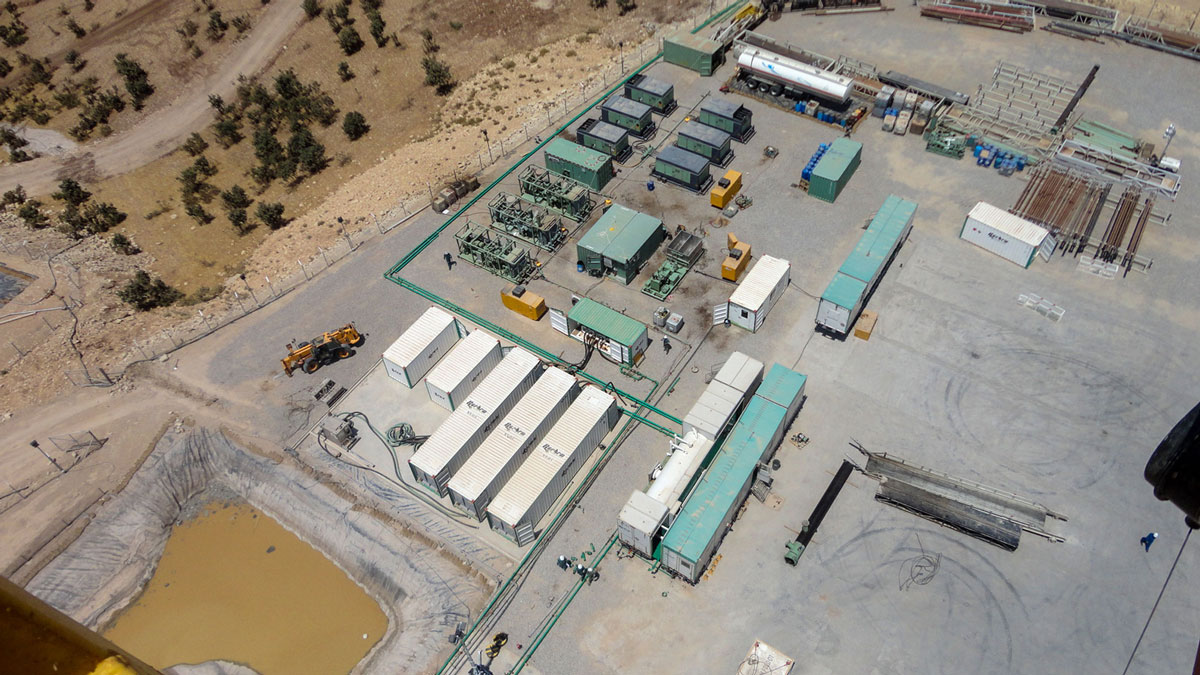 ADA has designed and built a large fleet of high pressure rotating control devices (RCD’s) for use on onshore as well as offshore jackup and floating rig applications. The RCD’s have been designed and rigorously tested to API specification 16-RCD. The RCD’s are available in sizes from 11“ to over 33“.

ADA designs and manufactures the Strata range of high pressure RCD’s, and also owns a wide range of Elite Drillmaster RCD’s. Some of these come equipped with a remote hydraulic clamp and a top flange for connecting to a riser spool on offshore rigs. 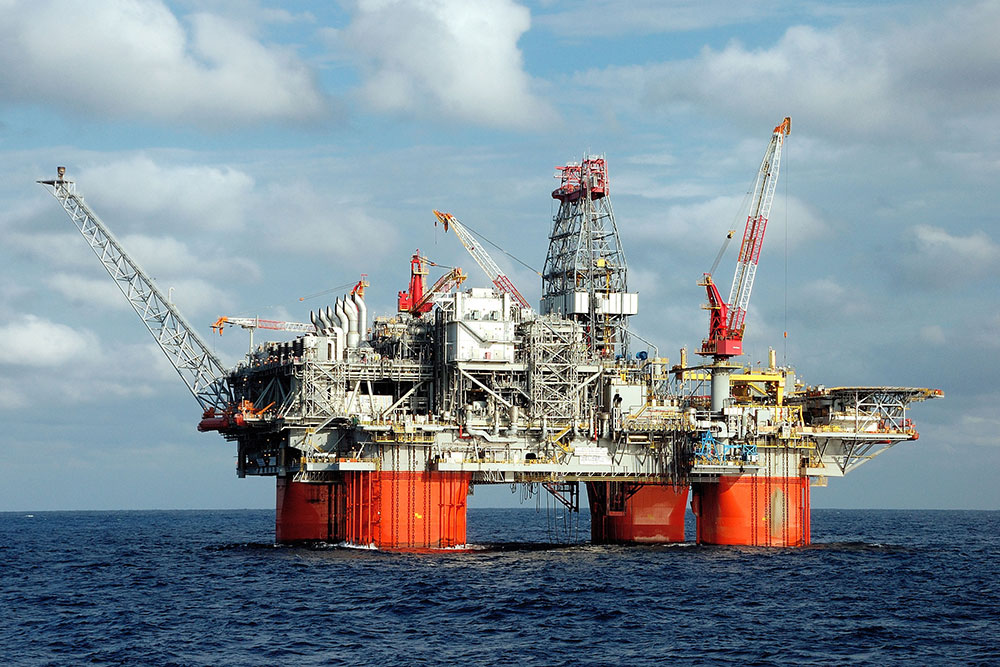 The Marine Diverter Series (MDS) is under development for subsea and below the tension ring applications on floating rigs. The Strata push-pull machine (PPM) can control pipe movement into and out of the well in pipe-heavy situations such as rig floor snubbing in live well applications. It can be installed in most drilling and workover rigs and adapted to fit most rotary table bushing sizes or be supported from the BOP stack. On pipe-light situations the PPM can also be used to significantly improve ROP during the slide intervals of shallow TVD extended reach horizontal wells, increasing hole depth by as much as 1,000 feet over conventional methods.