Air Drilling Associates has extensive experience in selecting those chemicals that provide the best performance, through extensive laboratory testing and field trials. The current range of chemicals includes the following: 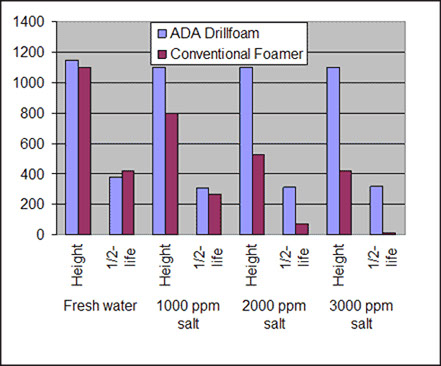 ADA Inhibi-Foam is drilling foam agent with a filming amine corrosion inhibitor mixed in at the correct dosage, ensuring that metal components are always properly protected and preventing (accidental) overdosage and expense. The use of a single formula also simplifies logistics and saves cost to the client, especially in remote locations.

ADA’s standard foaming agent is “ADA Drillfoam”, a special derivative of sodium alcohol ethoxy sulphate blended with chelating agents and water. This formulation was selected after extensive testing of various formulations and offerings from suppliers and blenders. We have used this product since 2005 on all our projects; it is a very powerful foaming agent able to create very stable foam.

The stability or “stiffness” of a foam can be tested by agitating the base fluid with a given concentration of foamer in a blender, and observing the speed at which it breaks. In such tests, the “half-life” is the time after which half of the original liquid volume (base liquid + foaming agent) has broken from the foam phase and collected on the bottom of a measuring cylinder. The longer this takes, the “stiffer” the foam.

Surfactant for Foam Based Drilling

DRILL-FOAM is special derivative of sodium alcohol ethoxy sulphate blended with chelating agents and water resulting in a high performance drilling foam for air rotary drilling and foam drilling. DRILL-FOAM is effective in fresh, brackish and hard water and in the presence of small quantities of hydrocarbon.

DRILL-FOAM has the following functions:

Concentrations in the range of 0.5 - 1.5 % based on fluid volume are recommended to obtain suitable foam consistency. To control severe water influx, increase foam concentration and decrease injection rate. The quantity used would be dependent on the drilling fluid system, drilling depth and equipment.

It is recommended to pre-treat very hard water with soda ash.

DRILL-FOAM is a special derivative of alkyl sulfonate which has a high performance drilling foam for air rotary drilling and foam drilling. ADA DRILLFOAM - B is effective especially in brackish and hard water and in the presence of small quantities of hydrocarbon.

ADA DRILLFOAM B has the following functions:

Concentrations in the range of 0.5 - 1.5% based on fluid volume are recommended to obtain suitable foam consistency. To control severe water influx, increase foam concentration and decrease injection rate. The quantity used would be dependent on the drilling fluid system, drilling depth and equipment.

It is recommended to pre-treat very hard water with soda ash.

Inhibiting Properties for Foam Based Drilling

INHIBI-FOAM is a synergistic blend of a film forming corrosion inhibitor, alcohol sulphate and selected surfactants with a high calcium tolerance, making it particularly suited as a high performance drilling foam for aerated and foam drilling. INHIBI-FOAM is effective in fresh, brackish and hard water and in the presence of small quantities of hydrocarbon.

INHIBI-FOAM has the following functions:

INHIBI-FOAM will generate a stiff and stable foam. In general a dosage of 0.5 – 1.5% is usually sufficient to obtain a suitable foam consistency with good corrosion protection. If very hard water is being used, it is recommended to pre-treat the water with soda ash. To control severe water influxes, increase foam concentration and decrease injection rate. The quantity used would be dependent on the drilling fluid system, drilling depth and equipment.

The stabilizing action of the surface elasticity and surface viscosity of the film is what makes foam difficult to break down. The surface viscosity can very easily and quickly be modified through addition of chemicals with low surface and interfacial tensions. This enables them to flow easily over the film. They seek out openings between the foam-stabilizing surfactants at the liquid-air interface and occupy them. Silicones’ low surface tension and interfacial properties combined with their lack of foam-stabilization properties cause the foam wall to thin and collapse.

The disadvantage of using defoamers is that these make the resultant defoamed process water very difficult to re-foam, so that this will need to be disposed of. ADA provides three different defoamers, we will also discuss their compatibility with waste water treatment facilities:

We have tested the defoamers for their effectiveness; these results are shown below: 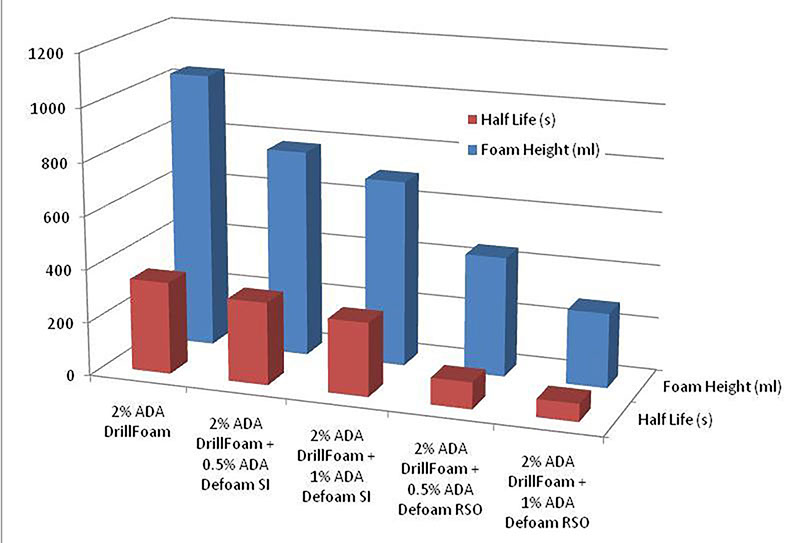 These tests showed that the new rape seed-based ADA Defoam RSO was even more effective than the silicone based defoamer.

During aerated water drilling operations we often add small amounts of foaming agent and viscosifier to better “bind” the air-water mixture, this reduces slugging and improves the operating range for the favored bubble flow regime. Sometimes though excess foam is added to the aerated water/mud system, this can cause problems on surface with foam build-up on the pits which then can then blow onto location.

Aerated drilling will lead to increased drill string corrosion rates due to the highly oxygenated environment. This is similar to conventional drilling when leaking mud pumps or hoses introduces additional oxygen to the system, only in aerated drilling the oxygen percentage and therefore the corrosion rate is significantly higher. In geothermal drilling the corrosion rate is enhanced even more due to (1) higher temperatures, and (2) influxes of hydrogen sulphide (H2S) and chlorides (from water/steam). Add to that the high downhole pressures and it leads to a real “witches brew”. This will lead to a reduced life of drill pipe and BHA components, as well as the casing.

The corrosion rates can easily be monitored using corrosion coupons and –rings. The coupons are inserted into the mud system and mud return line, while the corrosion rings are inserted into the drill string so that the added effects of pressure and temperature can be measured. At specific intervals these coupons and rings can be removed and measured and analyzed for corrosion. The observed corrosion rates can then be applied to the drill string and casing.

The corrosion inhibitor supplied by Air Drilling Associates, In-Hib Plus, is a filming amine type inhibitor that protects the pipe from oxygen corrosion. For it to function properly, the pH of the injected water will need to consistently be above 9-10. This corrosion inhibitor does not protect against corrosion caused by high levels of hydrogen sulphide. Under no circumstances shall Air Drilling Associates be held accountable for any damage to client’s or its contractor’s drillstring or other components due to the effects of corrosion.

In 2010 ADA had Intertek, an international third party laboratory, perform biodegradability and toxicity testing on all its chemicals. Intertek is an international testing agency that employs 26,000 people in 1,000 locations in over 100 countries.

The biodegradability tests were run as follows: Test substance was applied to closed bottles with non polluted filtered and aged seawater which had been fortified with nutrients for enhancement of bacterial growth. The test substance was incubated for 28 days at (26 ± 0.5 °C) in the fortified seawater, and the biological oxygen demand (BOD) during this period measured. The BOD values were related to a theoretical oxygen demand (ThOD) or chemical oxygen demand (COD) and percentage biodegradability in seawater estimated. Optional tests were run to validate if the test substance inhibited bacterial growth or consumed oxygen by non biotic processes.

The Office of Prevention, Pesticides, and Toxic Substances (OPPTS) is an agency of the United States Environmental Protection Agency (EPA). The OPPTS has responsibility for Agency strategies for implementation and integration of the pollution prevention, pesticides and toxic substances programs and developing and operating Agency programs and policies for assessment and control of pesticides and toxic substances as well as recommending policies and developing operating programs for implementing the Pollution Prevention Act. The OPPTS criteria for “well biodegradable substance in marine environment” is that it should have a measured BOD > 60% of its ThOD.

The conclusion therefore is that the base foaming agent ADA Drillfoam is more easily biodegradable than the variant with corrosion inhibitor.

The test material in the form of chemical solution applied orally using the procedure of ASTM Designation E.1163-90 on Acute Toxicity Test (LD 50). The technique is used in this test method is alternative the classical LD 50 test and is applicable to both liquid and solids. The test animals should not be fed for 18-20 hours prior to the application of LD 50 test per oral using Stomach tubing according to the dosage needed. Observation is held to see if any of the test animals die within 24 hours. Observe the animal for mortality and pharmacologic signs periodically. Weight all surviving animals on day 7 and perform a gross necropsy. The necropsy should entail a macroscopic inspection of all visceral organs.

The way that toxicity is reported varies per country, most of which have regulatory systems in place for these types of requirements. This leads to inconsistent protection for those potentially exposed to the chemicals, as well as creating extensive regulatory burdens on companies producing chemicals. This is why the United Nations developed the Globally Harmonized System of Classification and Labeling of Chemicals. The GHS is a system for standardizing and harmonizing the classification and labelling of chemicals, and it gives us a way to compare different countries standards against the GHS. For more information please visit this website: http://www.osha.gov/dsg/hazcom/ghs.html

The toxicity tests that have been done on this product were done as per the European Union guidelines, i.e. if after consuming 2000 mg per kg of body weight the rat is still alive then the product is called “non toxic”. This is also applied in the same way in Australia and most other countries (see below). 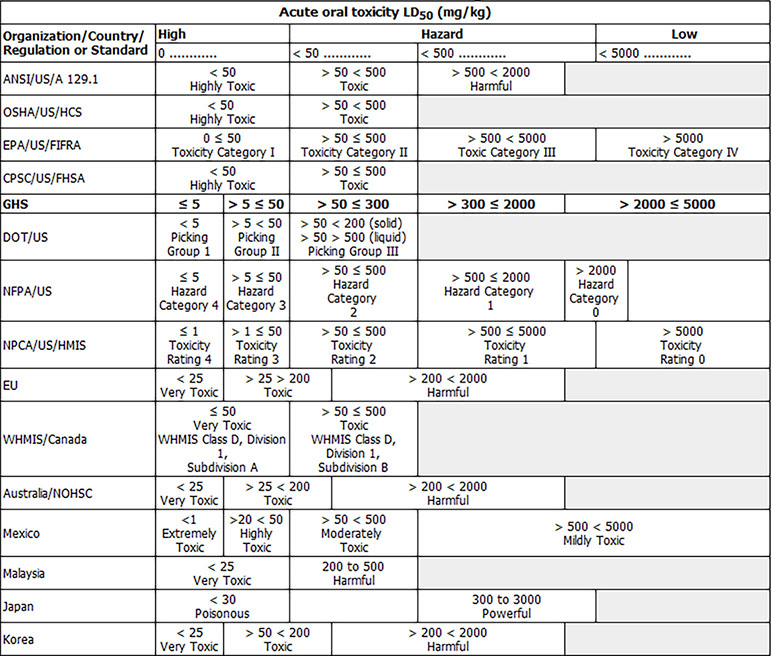 By comparing to the table Oral Toxicity level according to the EU scale above, it can be concluded that the sample of ADA Drillfoam: 8,706 mg/kg BW is “Non Toxic”.

BBy comparing to the table Oral Toxicity level according to the EU scale above, it can be concluded that the samples ADA Inhibifoam : 6,526 mg/kg BW is “Non Toxic”.

BThe information we have on our proposed ADA Defoam RSO is that it has an LD50 (rat) > 2000 mg/kg of bodyweight, so that it is regarded as “non-toxic” in the EU, Australia and many other countries.

BPlease note that ALL the other chemicals that we have proposed for this work are therefore non-toxic under the relevant legal guidelines for this project.

BAs for the biodegradability, since ADA Defoam RSO is made of a completely natural vegetable oil base we have no doubt that it will exceed the client’s minimum requirements.